Bugatti Bolide Hypercar is the lightest, fastest, most powerful, and most extreme track-only hypercar concept by Bugatti in their entire line-up. 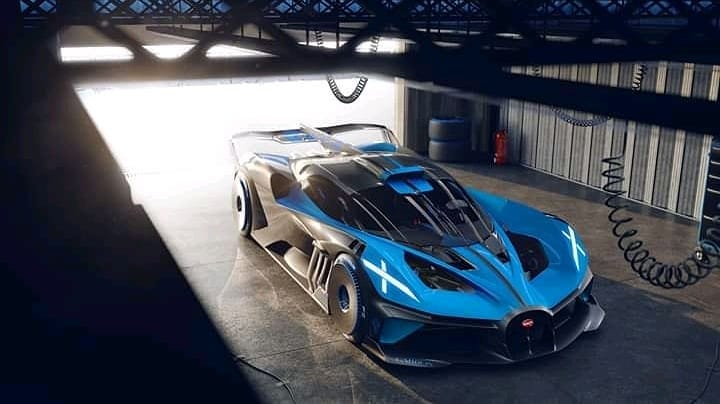 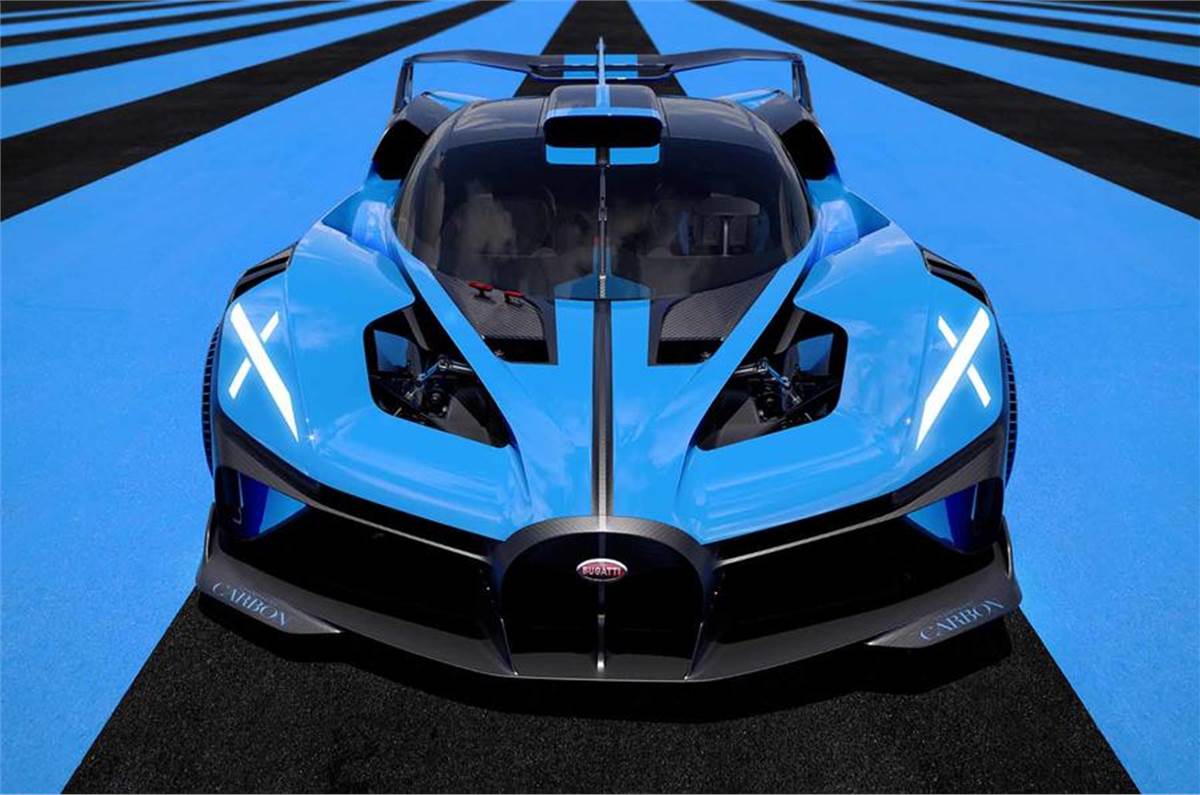 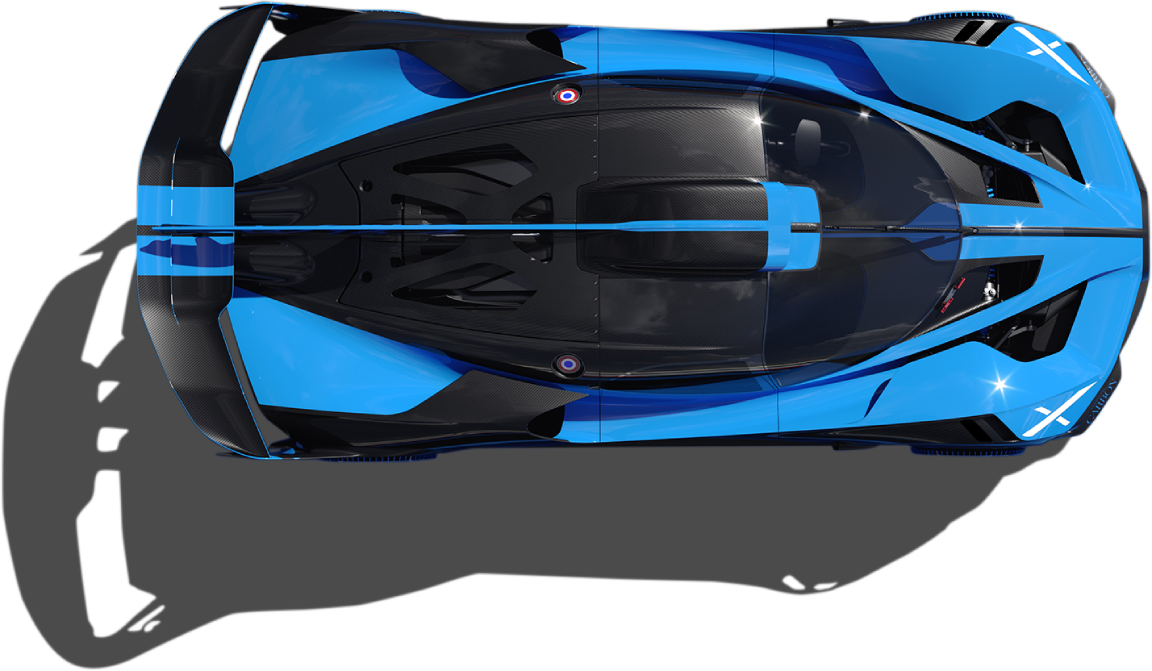 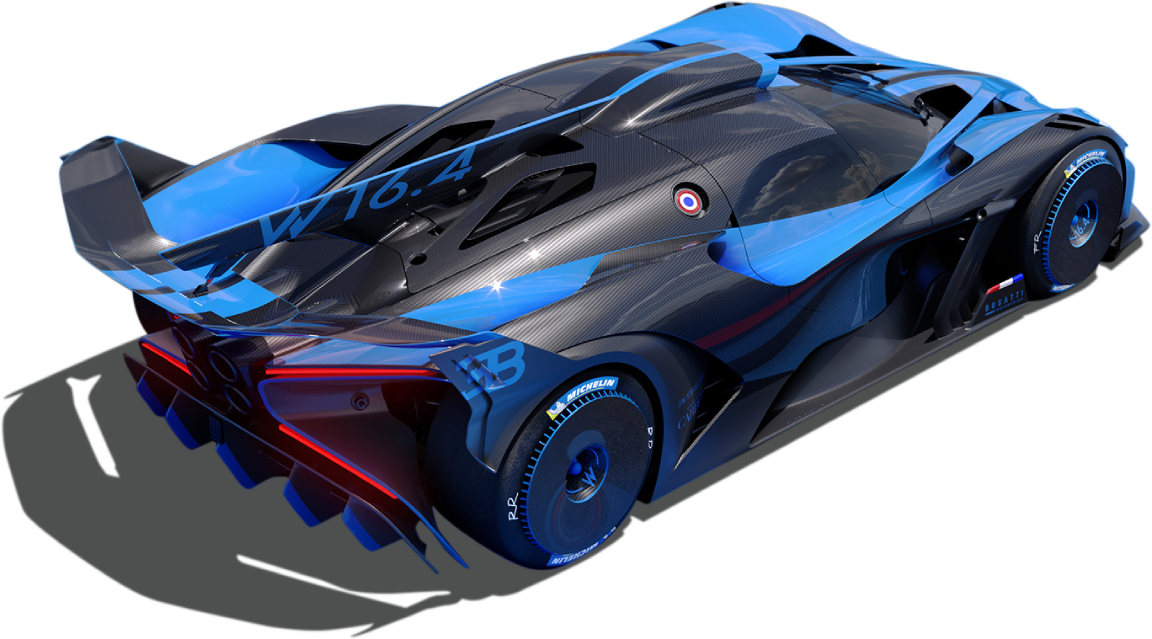 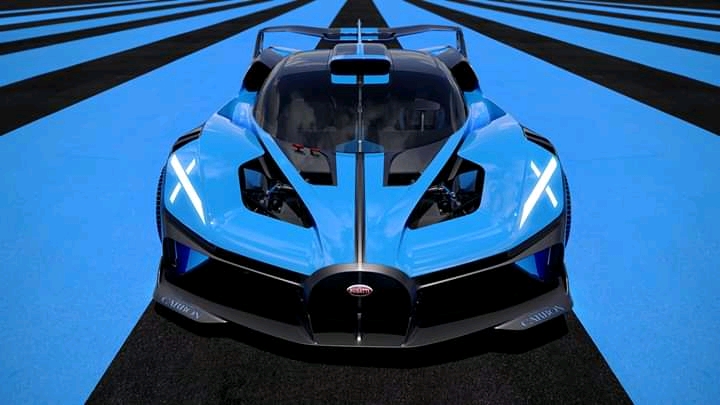 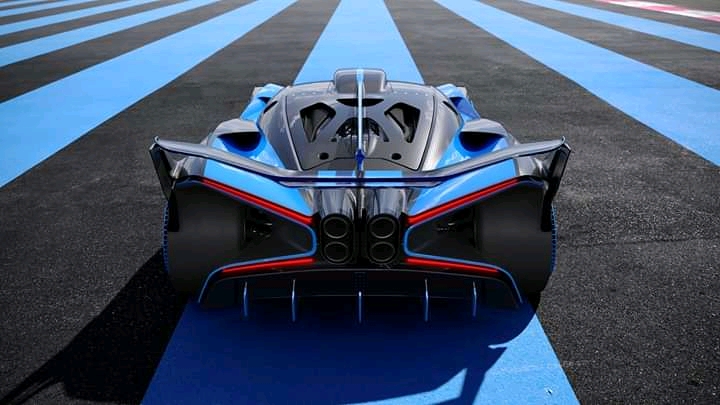 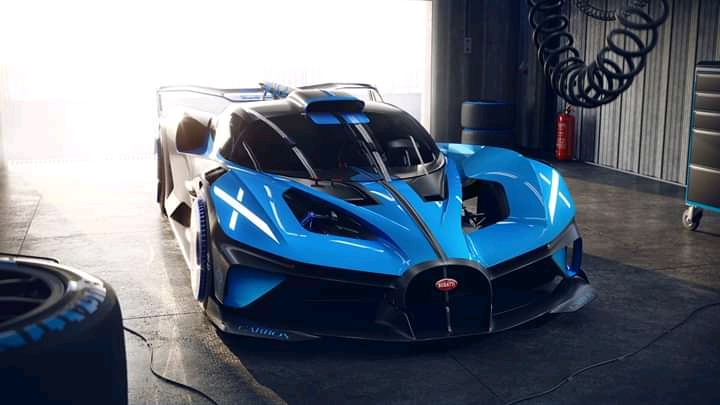 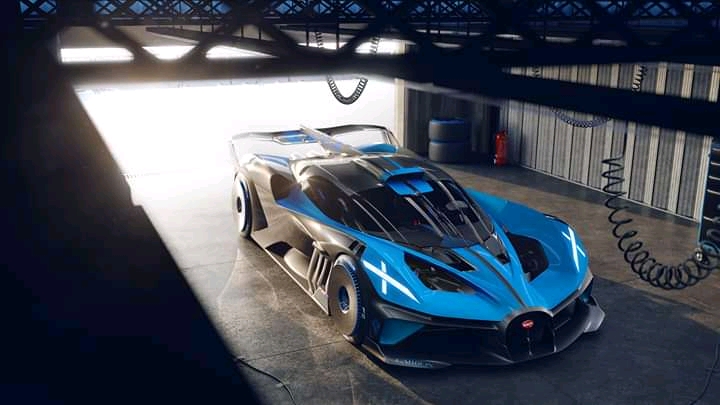 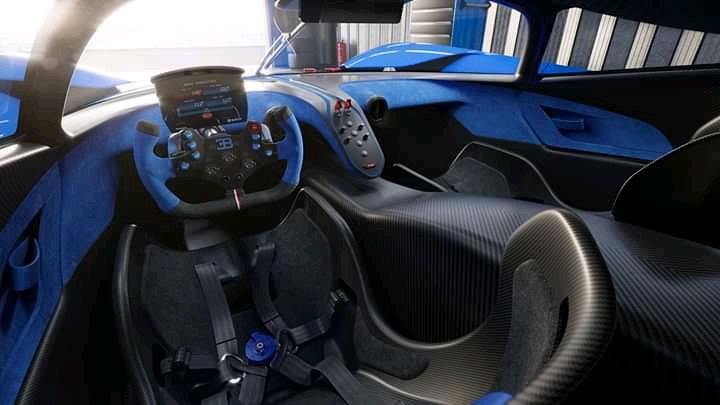 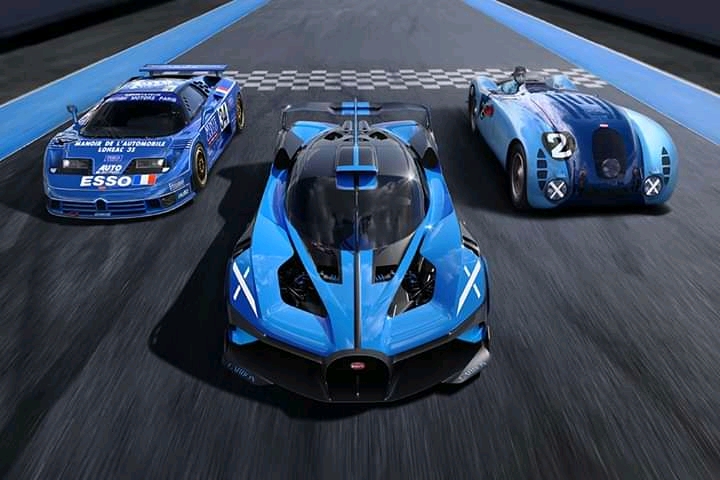 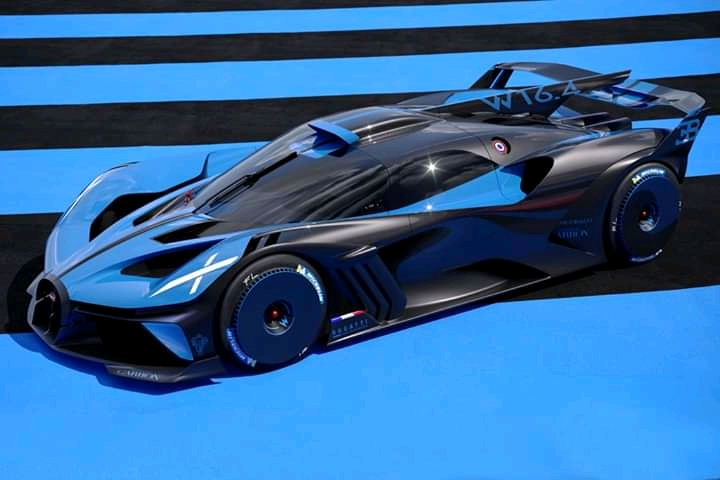 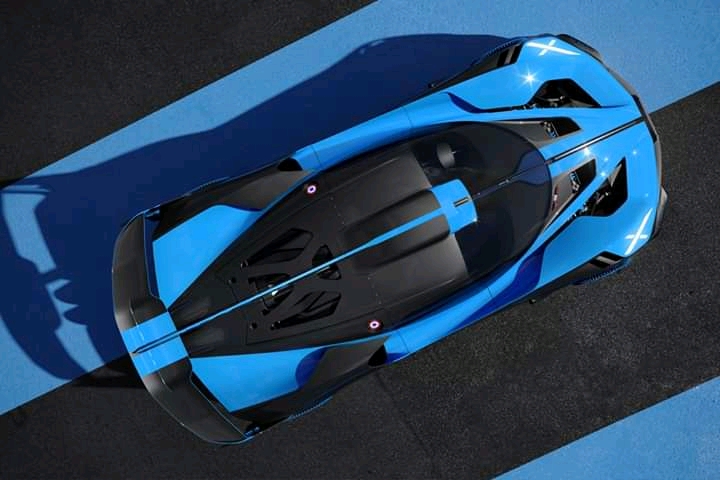 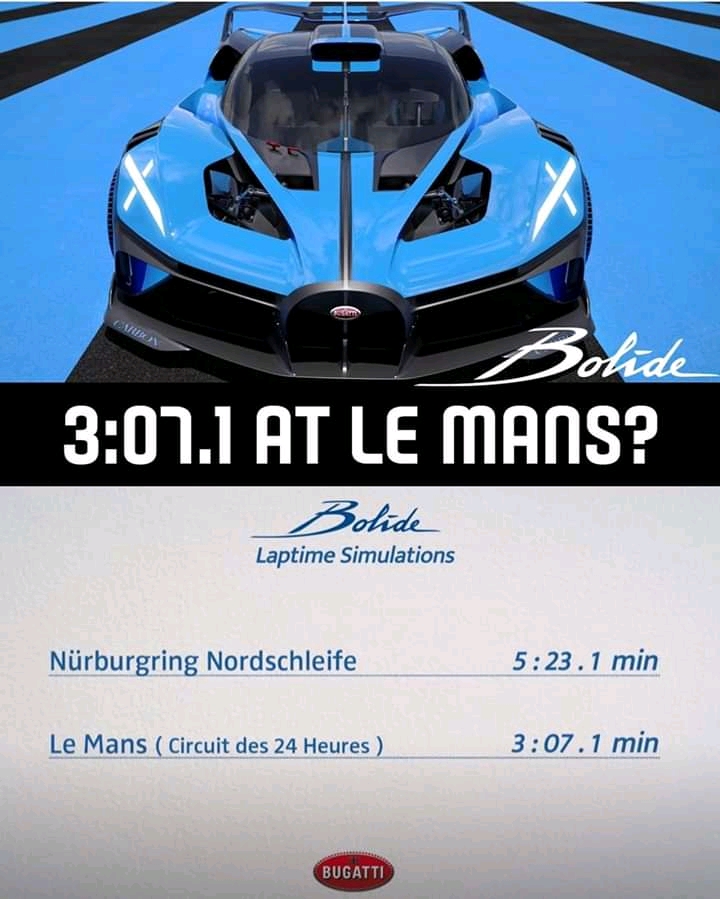 Bugatti is known for its track cars from the early times when it was more of a race car manufacturer than a luxury supercar brand like now. It’s not like Bugatti does not make track-focused cars in their modern line-up, there are exclusive cars like the Buggati Divo and Chiron Pur Sport. But Bugatti took the track-focused car to a whole new level with the Bolide Hypercar concept.

The Bolide is a track-focused concept by Bugatti with 1825 HP and just weighs 1240 kg, as a result, gives the car an astonishing weight-to-power ratio of 0.67kg per horsepower. Well, this was possible due to the use of extremely lightweight carbon monocoque chassis and a newly developed quad-turbo 8.0litre W16 engine that powers all four wheels and produces more than 1600 HP that this engine makes in the Chiron Super Sport 300+.  This extreme performance from the engine was achieved by making changes in the intake and exhaust profile, four new turbocharges were developed for lag-free and by redesigning the dry-sumo lubrication system, also Bugatti claimed in reducing the overall weight of the powertrain. The massive engine also gets a new air-to-air intercooling system with water pre-cooling to keep temperatures down for max performance output, for cooling the ventilated brakes, carbon-titanium radial ‘turbofan’ compressors are placed in the wheels. The whole drivetrain- the engine, transmission and differential get three air-cooled oil-coolers along with water-cooling.

Also all the screws and fastening elements are made of titanium and super-thin aerospace-grade hollow titanium alloy, which have been 3D printed, is used for various components. The brakes are carbon ceramics and the monoblock callipers weighs just 2.4kg each, while the centre-lock forged aluminium wheels weigh 7.4kg at the front and 8.4kg at the rear. The rims are wrapped in Bespoke Michelin tyres with extreme width measuring 340mm at the front and 400mm at the rear. Bugatti has also equipped the Bolide Hypercar with a compressed-air-driven jack with four rams for easy and fast tyre changes in the pit. The extreme features don’t just end there as the suspensions also gets titanium pushrods with horizontal dampers. The pushrods weigh just 100g. Moreover, the stainless-steel control arms welded and designed in such a way that they work like wings for added aerodynamic.

The insane-looking bodywork is designed with only one thing keeping in mind, aerodynamics. Bugatti claims the Bolide Hypercar can produce 1800kg of downforce at the rear wing and 800kg on the front wing at speed of around 321.8 Kph.

There are more noticeable highlight in the bodywork like the roof-mounted intake scoop, which is specifically designed to works as an active aero component for the Bolide. The scoop works in such an away that at low speed the surface is smooth while at higher speeds bubbles forms and help reduce drag and downforce.

As a track car should be Bugatti has made The Bolide a very low-slung car and it’s just 995mm tall which is 300mm lower than the Chiron itself. It has doors like an LMP1 (Le Mans) racing car which open upwards. Air ducts are also designed in a way like Formula 1 cars gets. The Bolide also features ‘X’ theme all over (can be seen in the rear light designs) refers to the iconic Bell X-1 experimental jet aircraft that Chuck Yeager piloted to become the first man in history to break the sound barrier in 1947.

While the Buggati Bolide is still a concept car, Buggati claims that it can achieve a theoretical top speed of more than 500.50kph without any issue with its handling. Moreover, Bugatti claims the Bolide can do a lap of Le Mans in 3:07.1 minutes and a lap of the Nürburgring Nordschleife in 5:23.1 minutes (simulated) which is blazing fast and interestingly only a few seconds slower than the lap time recorded by the Porsche 919 Evo LMP1 racecar.

Bugatti also says the car is built with safety features that meet FIA racing regulations. The Bolide also has reference to the iconic Bugatti Type 35 racecar of the 1920s. It will be very exciting to see the car in some race events, also some sources say that Bugatti could enter the Le Mans 24 Hours endurance race soon enough.

Also, it is not clear that Bugatti may build this car for customers. All Bugatti claims that it’s a technological innovation for future Buggati models. Hope they bring this into production.

Thu Nov 5 , 2020
Spread the love Post Views: 766 All-New Hyundai i20 is just launched in India with base variant petrol version starting at Rs 6.80 Lakh and diesel version starts at Rs 8.20 Lakh Ex-showroom. It seems like a 4th generation i20 but it is the 3rd generation model of the premium […] 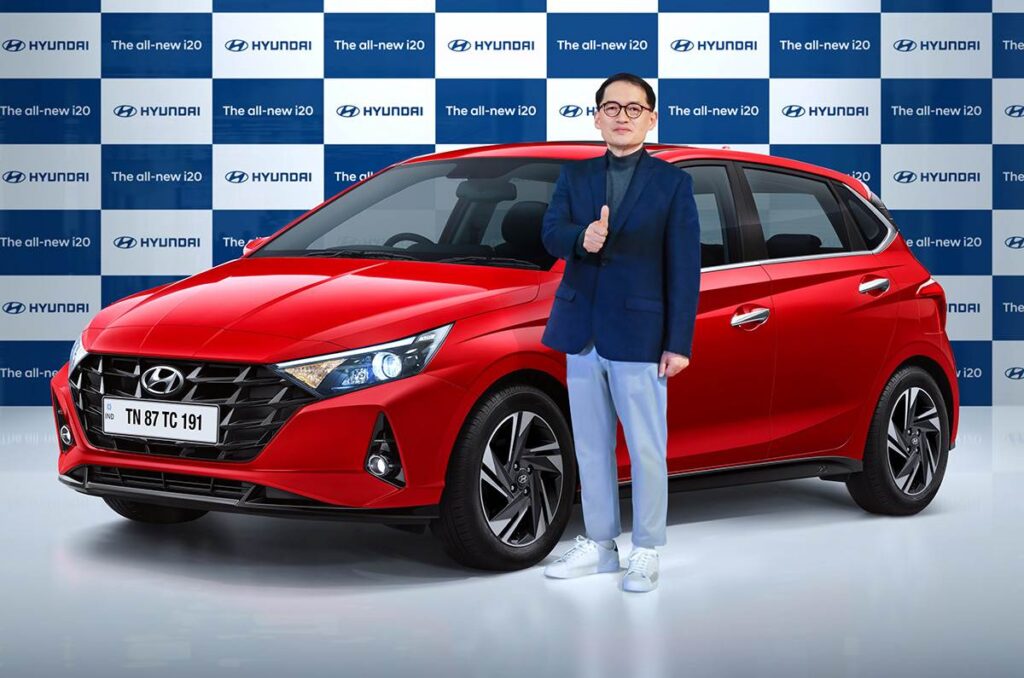