There was a time when people wanted to talk about cars and stuff in front of the camera, we have to be a presenter from some of the TV shows like Fifth Gear, Top Gear, and more.

But then came YouTube, GoPro Cameras, Smartphones, and editing software, and combining all these helped some people to totally change the Automotive world. These talented people are none other than the Auto Vloggers of YouTube. They took the supercar world to a whole new level and invited us along for the joyride with them visually.

If you’re a Motoring Enthusiast like me then you should totally follow these guys. Here I will be sharing about some of the top YouTubers who are best to my knowledge.

One of my favorite Auto Vlogger is none other than Doug DeMuro. Full name as Douglas DeMuro born on May 22, 1988, is an American automotive reviewer, content writer, author and YouTuber. He writes articles for the Autotrader.com blog Oversteer, posts car reviews on his YouTube channel called simply Doug DeMuro, which has over three million subscribers and recently started a car auction website Cars & Bids. In the past, he has written for the car websites The Truth About Cars and Jalopnik. 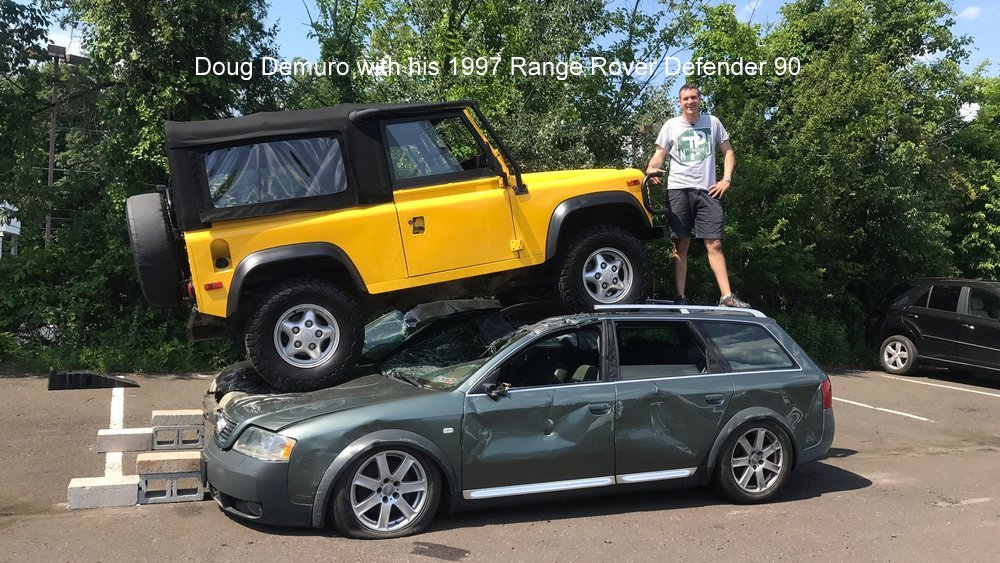 Shmee150 is the personal brand of Tim Burton, or else only called as just ‘Shmee’, who travels the world to seek out the greatest and most exclusive automotive content possible. He captures the content using his signature video selfie technique that helped him gain over 2.08 Million subscribers on YouTube.

Before choosing to be an Automotive vlogger he was working in the family shop and also as a ski instructor in New Zealand, Tim made his first YouTube video in 2010 and since then he never looked back and posted nearly 4000 high octane contents of various supercars and hypercars around the globe.

With his opening line, Hey Guys! Its Shmee, he really made some strong grasp on YouTube that helps him get average 100k views on a single video within one day. This helped him live the Supercar dream in reality which was a book he wrote also which is a dream for us many 😆 YouTubers like Tim also make incredible advertising for manufacturers such as Porsche, BMW, AMG.

Shmee also got a fleet of Supercars which he calls the ShmeeMobiles that can be seen in his videos.  His first car had been a Renault Clio, and his first sports car was an Aston Martin Vantage. His former cars include three McLarens,  another Aston Martin, a Ferrari FF, a Porsche 911 GT3, a classic Mini, and a Morgan 3-Wheeler. Currently, he owns twelve cars, amongst them are his latest addition the BMW M8 competition, Ford GT, a McLaren Senna, two special-edition Ford Focus RS’s, an Aston Martin Vantage GT8, a Mercedes-Benz SLS AMG Black Series, a Mercedes-AMG GT R Pro, AMG G63, Toyota GR Supra, Ferrari GTC4Lusso, and a McLaren 675LT Spider.

Paul Wallace is a 25-year-old Supercar enthusiast and auto vlogger who started his first YouTube channel in 2006. Now Supercars Of London (SOL) has 800,000 subscribers and over200 million views and is one of the top five car vlogs in the world.  From reviewing the latest cars, road-tripping around the world in the fastest, most exotic of cars through to the purchasing of his very own supercar, SOL is considered a market leader and influencer within the automotive industry.

With a huge smile and typical video making style Paul Wallace aka Supercars of London began his vlogging career by making a video of some Aston Martins back in 2006. Since then, he used his YouTube popularity to launch his own SOL clothing brand. 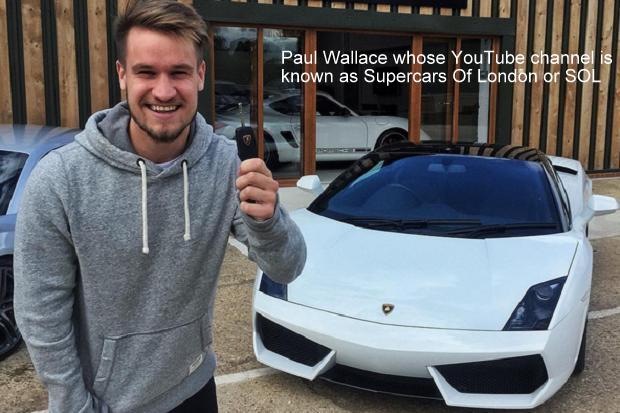 Wallace started his YouTube channel featuring the Supercars and over the next eleven years, he has been the proud owner of multiple cars including Lamborghini Gallardo LP560-4, Mercedes-AMG GT S, BMW M3 and the Audi R8 V8. He currently owns a satin black BMW M3 and Arlon satin black chrome Mercedes-AMG GT S which has Rennteck package.

His success with YouTube channel specializing in automotive content provides him with an opportunity to trade in his Audi R8 for a limited edition Lamborghini Gallardo that only is owned by two hundred fifty people in the world.

One of the most glamorous Motoring vlogger is none other than Alex based on Dubai a.k.a Supercar Blondie which is also the YouTube channel of hers. Alex Hirschi born 21 September 1985, is Australian and she is best known for her automotive videos, which she posts on a regular basis on Facebook, Instagram, and YouTube. Her Facebook page has more than 18 million followers, her Instagram over 6 million followers, and she has over 3.8 million subscribers on YouTube. As per reports from Socialbakers, her Facebook page was globally the fastest-growing page in 2018.

Before becoming a full-time YouTuber For 9 years, she was a newsreader and presenter for a talk radio show on Dubai Eye 103.8, where she interviewed many celebrities. In 2018, she left the radio show and became a full-time influencer and auto vlogger on social media and YouTube.

Supercar Blondie’s social media presence is so strong that automotive brands like Bugatti and Ferrari advertise their products through her. She did laps with Stig from Top Gear on a track in the UAE and even drove the Batmobile from the 1989 Batman movie. 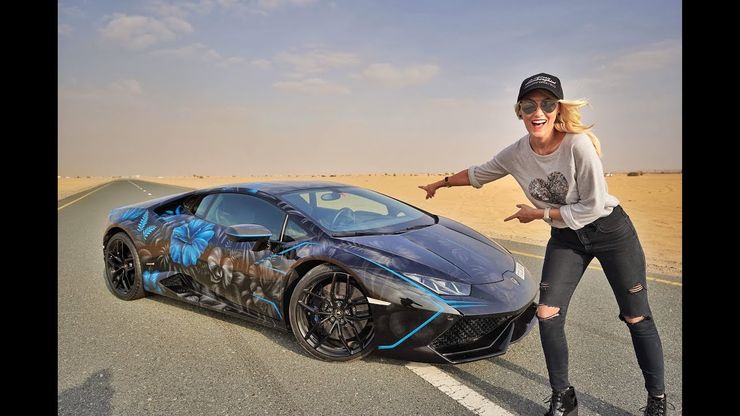 Supercar Blondie with her Lambo LUCY 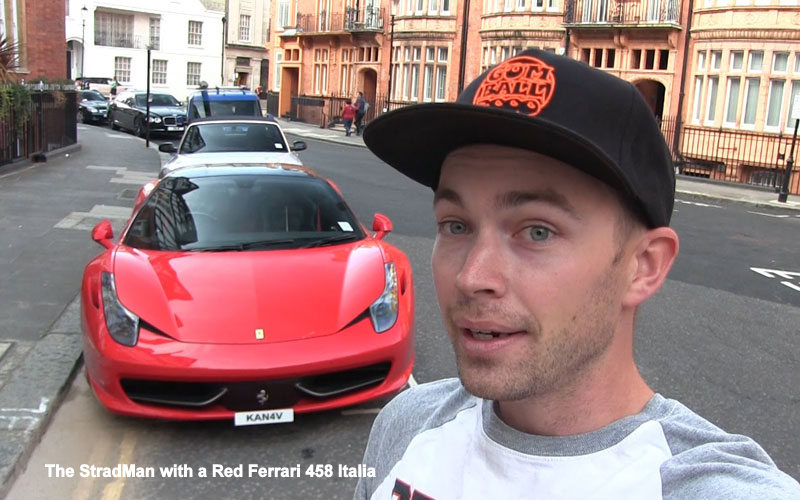 Being born on may 7 1989, James after starting his YouTube channel has around 2.61 Million subscribers on YouTube and 687k followers on Instagram. His success in YouTube and social media had made him possible to own a fleet of super cars namely 2004 Ferrari F430 Challenge Stradale, 2012 Lamborghini Aventador,2020 Toyota Supra,2005 Ford GT, 2006 Lamborghini Gallardo,2017 Ford Focus RS (Mountune edition),2020 Jeep Gladiator,2020 C8 Corvette. Among these the Ferrari and 2006 Gallardo are his most priced possessions.

Parker Nirenstein started writing car reviews in 2011 before deciding to start his career as an Auto Vlogger with his YouTube Channel his Vehicle Virgins. His original mission was to educate first-time buyers so they could make an informed purchase when buying a new car. He was a Mechanical Engineering Student at Michigan University from 2013 through 2016 after spending one year at Tufts. He has held internships with Ford and Toyota. But now with his skills and motoring knowledge, he is one of the most successful Motoring Vloggers with 2.21 million subscribers on YouTube and with an average of 2.5 Million views on his videos. His first car was a BMW 3 series

Vehicle Virgins generates anywhere from $3,300 to  $27,000 in revenue per month. For context, that’s roughly four times the revenue consumer magazine brands Car and Driver and Road & Track make on YouTube — combined. This help Parker with knowing plenty of wealthy mates, he’s been fortunate enough to drive his dream car, which is like many other car guys – a Koenigsegg, Lamborghini Gallardo, Mercedes S Class.

These are some of the top 6 Motoring Vloggers that make up my list.There are many more successful Vloggers but to my knowledge, these guys are today at top and really live up to their niche and contents.

Also, as a true Motoring Enthusiast can’t complete this blog without mentioning some legends in the Auto Blogging world with names like Petrolicious, Carwow, Jay Leno’s Garage, and some more ruling the Motor blogging industry for a long time. Do check their Youtube Channels for a fire-breathing high octane joyride visually.

Sun Jul 19 , 2020
Spread the love Post Views: 729 The new 2020 fifth-gen Honda City prices are out and again looks promising for Honda with 1st in segment features. Fifth Gen Honda CityImage Source: Google- Soham Thakur Honda City History and why its a special car? More than 20 years and City is […] 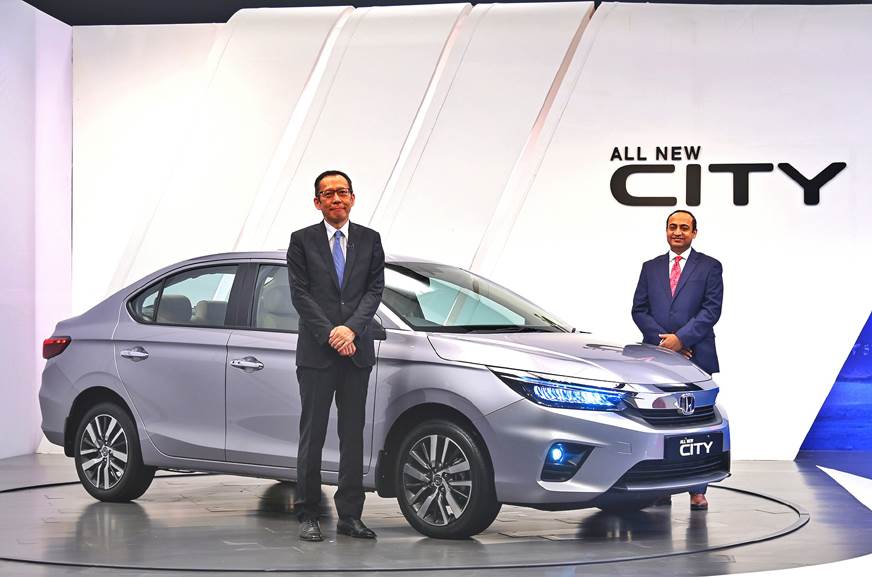